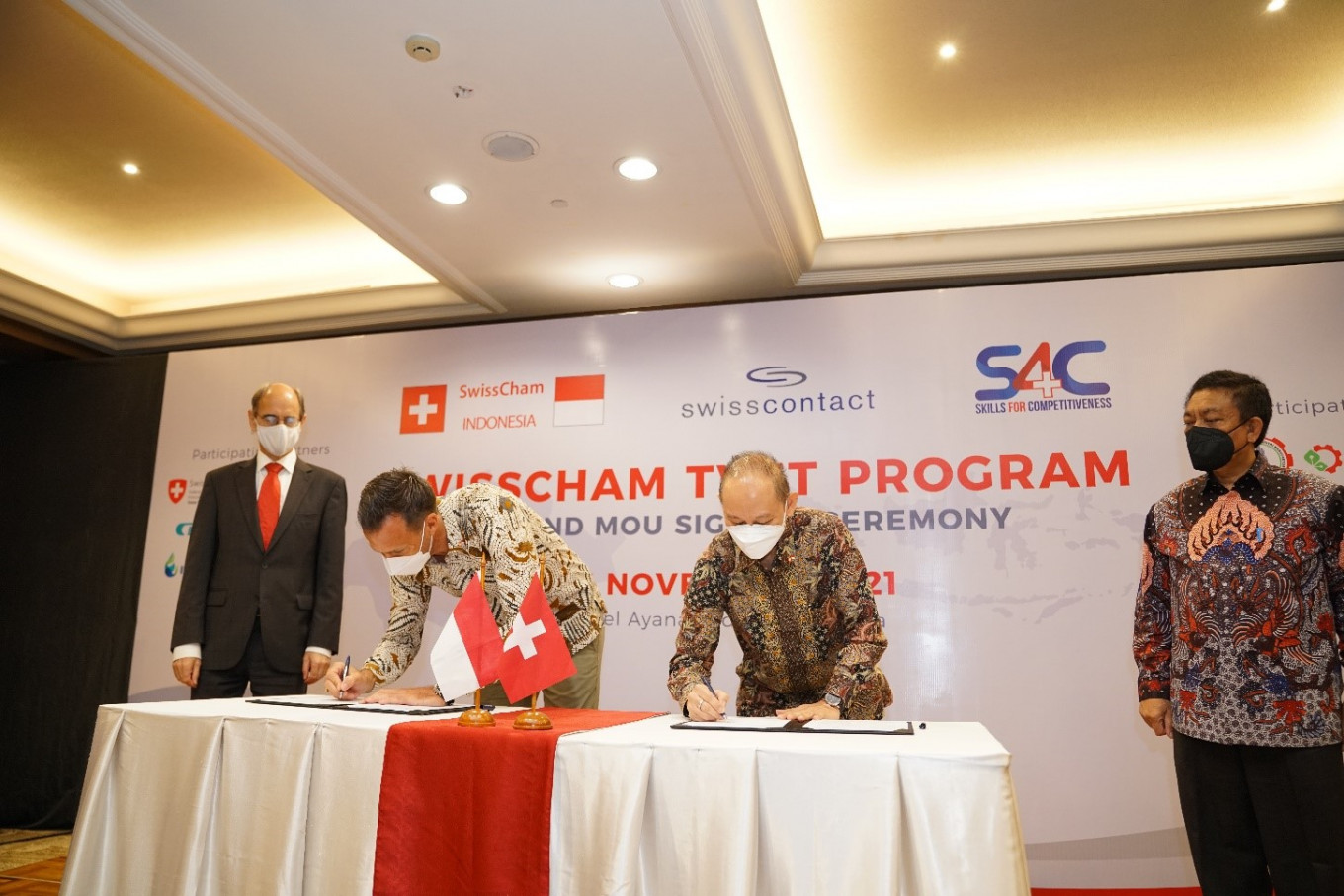 SwissCham Indonesia has signed a letter of intent (LoI) with the Swiss government agency Swisscontact, which is implementing the State Secretariat for Economic Affairs (SECO)-funded Skills for Competitiveness (S4C) project in partnership with the Industry Ministry’s Industrial Human Resources Development Agency (BPSDMI).

Following the LoI signing, SwissCham also facilitated the signing of a memorandum of understanding (MoU) between SwissCham member companies and three S4C partner polytechnic institutes to bring experience and know-how to vocational education and training. This momentum builds on an earlier MOU that had been signed between the Indonesian and Swiss governments on Jan. 26, 2018 in Davos, Switzerland.

The MoU signing ceremony was attended and witnessed by the Swiss Ambassador to Indonesia, Kurt Kunz.

Switzerland is known for its strong dual Vocational Education and Training (dVET) system, based on a tradition of operational excellence working closely with the private sector to contribute to creating a competent workforce. To date, the country maintains a strong industry-driven dVET system, which is one of the key qualities of the Swiss economy.

fWith their long history and experience in dVET, the Swiss government and the Swiss companies are committed to continuously strengthening the quality and relevance of the polytechnic system in Indonesia.

The S4C project was born out of a direct demand for support from the Indonesian government to address the demand supply mismatch in the labor market and the skills mismatch through reinforcement of the relationship between the education system and local industry.

Its overall objective is to contribute to increasing the competitiveness of Indonesian industry in selected sectors through better-qualified professionals educated at five vocational education institutions, in sustainable cooperation with the private sector.

Head of human capital sectoral group and vice chairman SwissCham Indonesia Henry Chia noted that the growing Indonesian economy will need not just more young people in the workforce, but better-trained ones, all the way from the shop floor to the top floor.

“The need for this is echoed well under the Making Indonesia 4.0 framework. Swiss companies operating in Indonesia highly value well practically trained professionals and are fully aware that the responsibility for the transfer of knowledge is in the hands of the industries and not the government. SwissCham members see the opportunity to form synergy by linking vocational schools that provide the students and companies with its technologies and resources, and a proven VET system adopted from Swiss institutions, could open up new space for more effective collaboration, benefiting all and to fuel Indonesia’s economic growth,” he explained.

Since the 1970s, Switzerland has been working with Indonesia in upskilling its workforce, which has resulted in a positive recognition by government partners and the public. Some of the key institutions supported include the National Hotel Institute (NHI Bandung) known today as STP Bandung, Politeknik Mekanik Swiss (PMS Bandung), known today as POLMAN Bandung; the Poly Development Center (PEDC in Bandung); Vocational Education Development Center (VEDC Malang) and the Training Center for Subject Matter Knowledge (SMK) Teachers; as well as Polytechnik Akademi Teknik Mesin Industri (ATMI) Solo, partially supported by the Swiss government.

Arus Gunawan, the head of the BPSDMI, said in his remarks that in order to develop the nation’s human capital, Indonesia will require major reforms to its education and vocational institutions.

“Enhancing the quality and relevance of vocational graduates to meet the needs of the private sector from both the vocational school and polytechnic levels will be an important success factor in enhancing global competitiveness, further reducing the skills mismatch and youth unemployment and contributing to a more competitive Indonesian economy. We have learned from the best and greatly appreciate the Swiss government’s commitment to sharing their expertise with us,” he continued.

From the private sector perspective, there are a number of collaboration opportunities to explore. This includes building up or expanding companies’ internal skills training programs, partnering with a training institution (polytechnics or vocational schools) along with a link and match program to do a dual training program. One of the signature programs was providing on-the-job training opportunities for teachers, instructors and students to gain practical insight experience, as well as assigning professionals from companies to be guest lecturers while engaging in curriculum-development processes.

“SwissCham and member companies are committed to supporting the government of Indonesia in developing its human capital and achieving operational excellence in industry. With more engagement, we can bring experience and know-how to vocational education and strengthen the competitiveness of the Indonesian economy,” Henry concluded.

Recently celebrating their 70th anniversary of diplomatic relations, Indonesia and Switzerland are strengthening their ties as partners for growth, marked by stronger diplomacy, the long-awaited beginning of the Indonesia – EFTA Comprehensive Economic Agreement and bilateral trade higher than ever before.